If I were to win a blogging award, it would be for the suckiest blogger alive.  Because I am so incredibly UNobservant, my 100th post came and went before I even knew I had posted the big 1-0-0.  If I cared about such things, my OCD would likely be in overdrive.  Luckily I don’t care about blogging statistics the way I care about my run data.   🙂

Moving right along….I mentioned a few weeks ago that our Doxie, Sophie, was under the weather and needed to be crated for a ruptured disk in her back.  The poor thing barely had any strength or control of her back legs and it was obvious that she was in quite a bit of pain.  Trust me when I say it was utterly heartbreaking to watch.

Obviously she didn’t sleep with us, as she normally does, during this period of time.  I didn’t think that it affected me much…..until she was well enough to sleep with me again!  I could tell last week that she was feeling better every day.  She looked better, moved better and was clearly tired of that crate!  Saturday evening was her first night back in our bed and she curled up right next to me just like old times.  It felt so good to have her with me again!

Training is going well.  In fact, since having the ART last week (going again today!!!) and becoming more consistent with my strength training and yoga, running is feeling better and better.  I ran Sunday but didn’t have another run scheduled until Wednesday night, and I was ITCHING to run!  I haven’t had that feeling for a really long while….that feeling in your gut that you think you might actually die if you don’t get to run.  An injured runner doesn’t get that feeling, because your body knows when it needs to rest.  This tells me that even though my ankle is still a wee bit cranky here and there, healing is happening!

Last night, I had an AMAZING workout!! The workout was to run 800s on the track, but first I was instructed to run one lap barefoot (after the warm-up, of course).  I have to say that I was apprehensive about the barefoot lap, simply because it had never even crossed my mind and it pushed me outside of my comfort zone a bit.  I actually enjoyed it!  It forced me to focus on my foot strike and I could tell that I had made adjustments before the end of the lap.  Actually, running with shoes on felt a little weird afterward.  😉 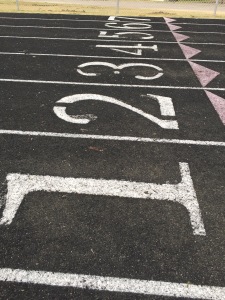 The running of the 800s went better than I expected.  I was shooting to run them at 5k pace and ended up under on each one of them!  The heel was a little cranky at the end, but after icing it at home and a night of good rest, it is actually feeling fairly normal today.  I expected it to be more irritated than it actually is, and that is REALLY EXCITING!!