In an attempt to catch everyone up to my crazy antics of late and to pick up where I left off in yesterday’s blog, I’m blogging two days in a row.  <shocked face>  That hasn’t happened since…….I can’t remember.  I always have the best intentions, but you know what they say about that….

If you knew me this time last year, you would know that I was still clawing my way back from that nasty ITB injury.  I was still attempting to build some sort of base fitness level and was doing those gosh awful run/walk intervals, so any kind of racing was out of the question.

2016 is a completely different year, though, and I am getting close to getting the framework of my race calendar set.  A couple of things are still up in the air but I’m hoping to schedule one last marathon toward the end of the year – I’m waiting to see how the rest of the season goes before I make any rush decisions on that one.  (Which will be a *first* for me, as one of my friends calls me “Trigger” because of my hasty race sign-up tendencies.)

My next race is RnR Dallas HM on March 20.  Even though the weather will likely be much warmer, I am going to see if I can continue the progress that I made at Cowtown, step out of my comfort zone and take a few risks.

Ragnar Austin is quickly approaching!  This 200-mile, 12-person relay will start in Fredericksburg in the wee morning hours on April 15.  We will race South then back North, ending the race in Austin sometime late Saturday.  I am beyond excited for this experience, as a Ragnar has been on my bucket list for quite some time now.

After Ragnar, I am planning to run Skyline HM on May 1.  I ran Skyline last year.  While I didn’t really care for the course, this race has a special place in my heart because it was my first race post-injury.  Of course, it will be hot and I always need practice racing in the heat.

I’ll have a dry spell on the road race front until the Rochester Marathon on September 18.  This will be my first full marathon of 2016 (am hoping to schedule another one in late December).  It is on track to be my favorite and most special race of the year because it will mean a reunion with my Sole Sister Jenn!  AAAANNNNNNNNDDDDDDDD – this race will be her FIRST full marathon and I get to be there when she punches her ticket as a marathoner!  I could not be more honored or excited!

I am considering at Salinas Valley Half Marathon on August 6, if a college visit trip to Cali pans out.  If I make it, I will get to meet my good friend, Marci, in person and hopefully a few other Cali friends!

Oh, the things I let my coach talk me into….

I am officially signed up for Pioneer Power Sprint Tri at the end of July.  This will be a special induction into the world of tri because Taylor is doing it with me!  Another meaningful twist is that this event is held at TWU, which is Taylor’s college alma mater.  I’m still scared to death of swimming 200m AT ONE TIME.  Swimming is coming along so quickly, though, that by the time July rolls around I should be MORE than ready!!

As scary as this monumental mound of miles may seem, I am still more frightened of swimming 200m in my July triathlon.  Go figure.

In any case, I’m fairly excited about this challenge.  It’s fun to run with teammates and this race will give me A LOT of QT with them! LOL  We are actually planning to stay together during the race to lend support to each other.

Looking to the horizon

I have another exciting goal up my sleeve that I’m not ready to share with the world just yet.  I guess deep down inside I need to find the confidence in myself to actually believe I can do what I’m hoping to do.

Training and running Dallas took most of my attention and focus until just recently, but our family has experienced some amazing and notable events as well!

I am the mom of a college graduate

She has decided to go ahead and get her Masters, and will be starting that journey in January at Texas Tech!  She is already and amazing coach and I know that she will be just as amazing in her teaching career. 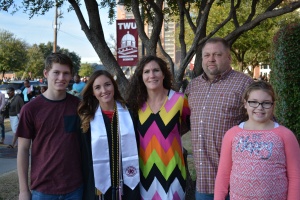 Taylor, Alli and I LOVE to go to the NCAA DI Volleyball Championships.  We have settled into a pattern of going every other year.  Two years ago we went to Seattle, and that city still stands out as one of my favorite places of all time!

This year, the championships were held in Omaha.  Going to a Nebraska game has been on my bucket list for quite some time.  Honestly, I still want to go to one in Lincoln, but I was happy to attend a Nebraska game in any part of the state!  I am a fan of the Huskers (and Coach Cook)!  Plus, I love the way that their fans wholly support the program.  Oh, and I love the way their fans are so knowledgeable about the sport of volleyball – you definitely can’t find that everywhere!

My friend, Mark, lives in Nebraska, and by extension, is a HUGE Huskers fan.  We discuss volleyball quite a bit…OK….ALL THE TIME.  When I learned the championships were to be in Omaha, I immediately asked if he planned to go.  We decided to buy tickets together so that we could enjoy the games together!

I REALLY wanted Nebraska to made the Final Four, so that I could see them play in person.  Of course, I am a Texas fan first and foremost, but I questioned their ability to win Regionals this year….and they barely did in a thrilling 5 set match with another of my favorite teams, the Florida Gators.  (Side note: I love Mary Wise!!!  She is always the last woman coach standing in the tournament.  I sooooo badly want her team to make it to the Final Four so that SHE can make it to the Final Four!)  I get so side-tracked when discussing volleyball!

Texas made it to the semifinals as well as Nebraska.  I honestly thought Texas would get knocked out my Minnesota in the semis (OK…..Hugh McCutcheon….ANOTHER of my favorite coaches!) but Minnesota played worse than Texas passed on serve-receive, so Texas was on to the finals.

Nebraska rolled over Kansas fairly easily and the Longhorn – Husker final was set.  I was torn.  At this point, I knew Texas had NO CHANCE of beating Nebraska, despite their 5-set win over the Huskers at the beginning of the season.  I could go into all the reasons, but I would bore all but one reader and you would all be confused anyway.  Plus, Huskers had home court advantage and their fans are INSANE!!

The finals match was very close during the first couple of sets, with Nebraska edging a 2 point win over Texas in both sets.  (Again, I could comment about how we were in the same terrible rotation at the end of each of those sets, but I’ll refrain.)  In set 3, Nebraska hit their stride, Texas started shutting down and it was all over except the roar from the Nebraska fans.  They really are amazing fans. 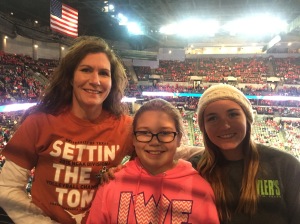 While in Omaha, we visited the zoo, which thankfully had several indoor exhibits because it was COLD!!

Saturday morning, we went to Union Station, which is now a museum.  It also lays claim to housing the largest indoor live Christmas tree.  This tree was apparently planted some 40 years ago locally, and had long ago outgrown this woman’s yard.  There was also a large train exhibit as well as a cool photography exhibit. 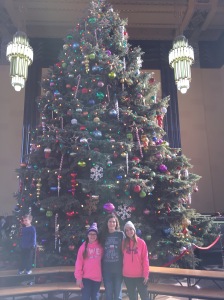 I can’t blog without discussing running

Last week, I took recovery VERY seriously.  I didn’t do ANYTHING….not even foam rolling or stretching….and I enjoyed every minute of it!  I wasn’t that sore after the marathon, actually.  My left quad and one of my left hamstrings were cranky, but otherwise things felt really good.  I could tell, though, that it would have hurt if I had gone running (it actually DID hurt when I had to run back to my car at the airport on Thursday).

My first scheduled outing was a 30 minute easy run on Tuesday.  All went well (except for the technical difficulties that were all my fault) and my legs felt sooooo good!  Now the problem is that I am antsy and I don’t run again until Sunday!  I’ve been filling my time playing with Logan’s weights, trying to figure out what I’m going to do for weight training going forward.  (Can you believe I didn’t add it during taper?!?  Me either.  Miracles never cease.)  I have also gotten back on my yoga and foam roll schedule.  Doing my stability routine for the first time was…..disheartening.  It’s amazing how much you lose in 10 days.  But day 2 the hips were much less wobbly and I know I’ll be stronger by Cowtown than I was at Dallas, so no worries there.

My wish to everyone is for you to have a wonderful time with your family during this holiday season!