It’s no secret that I don’t handle taper very well.  Historically, I have either made really stupid decisions, become ridiculously clumsy or signed up for all the races that I had no business running.   It was only recently that I realized all these taper crazies actually had nothing to do with the act of tapering.  I’ve come to realize that taper crazies are more of an outward measure of my race anxiety.

Trust your training, they said

I actually do trust my training.  I trust in my coach 100% and I know that he will always give me the road map to get there and race well.  I trust in the fact that I put a lot of dedication into my training and I follow my training plans very closely.  Rarely do I cut a workout short or skip altogether.

Somehow, I still get nervous when the race gets close.  Maybe it’s because I want to do my very best.  But maybe it’s because I don’t want to fall flat on my face…..which is why I think I’m so nervous about this upcoming 50 miler.  I think I have a severe case of performance anxiety.

I picked this 50 miler for a host of reasons, all of which seemed like really good ones at the time yet seem really stupid to me right now.

First, I wanted “redemption” on this Ragnar course after not being able to run my last leg last year.  Plus, call me crazy (Tim, Brent & Kelly already have – MANY times), but I LOVED this course.  It may have beaten me to a pulp, but I enjoyed every moment out there.

Also, I wanted to push myself to my limits.  At the time I signed up, I thought there was NO WAY I would be able to come close to beating the cutoffs.  And I was OK with that because I needed a race in which I wasn’t guaranteed anything.  I needed to pick a race in which “failure” was a very real possibility.  I needed a race that would break me down and require me to fight like hell to finish.  While this did actually scare me at the time, the minutia of training soon took hold and I haven’t thought about it in a while…..until I woke up one day and realized that race day was only two weeks away!

Part of my “therapy” to deal with my race anxiety is to get everything ready.  I was so chill leading up to my last couple of races.  I didn’t even pack until right before I left for them.  The anxiety is in overdrive this time.  But I’ve never attempted something this difficult, sooooooo……

I spent last week making my packing lists and getting race charts together.  I know that seems like overkill, but it helps me focus my energy on things that might actually help during the race.  I know I have packed WAY too much, but my philosophy is “I would rather have something I don’t need than need something I don’t have.”  I finished the packing yesterday, for the most part.  Doing this helps release some of that anxious energy and gives me some satisfaction knowing that I have “most” of my stuff together.  All I need to do now is load the car Thursday evening and that is a huge relief! 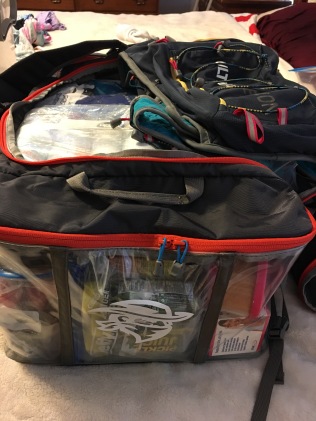 Even the best laid plans can go to shit

As far as my race plan, I have a few goals and I have some charts that will help me know if I’m on track.  I KNOW that ANYTHING can happen in an ultra and that no plan is fail-safe.  I’m actually really good at punting mid-race when that is required.  Having a plan makes me feel ready for the day and if that helps my anxiety, so I’m all for it. 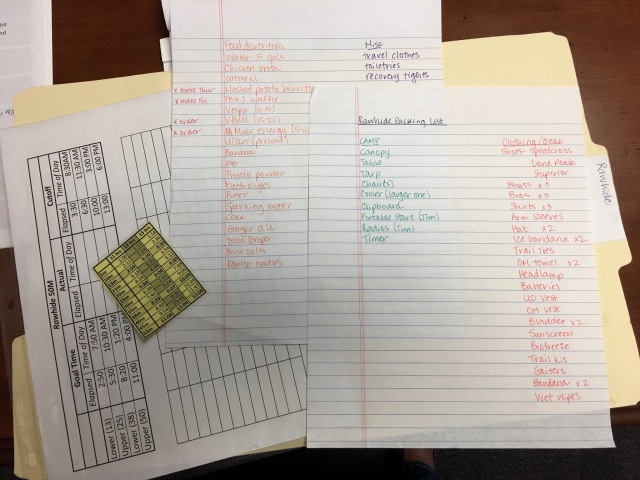 After that, my goal is to place top 3 women.  Obviously that depends a lot on what the women’s field is like and since this company doesn’t use UltraSignUp, I haven’t been able to stalk ANYONE.

My final goal is to beat the cutoffs.  The 13 hour cutoff is tight, for the course, so this is probably the goal that I’m going to be chasing all day.  I’m OK chasing this goal.  And I’m OK if I fall short, as long as I give everything I have while I’m out there.

The weather could also be a huge factor with forecasted highs in the low 80s.  Currently, the forecast is calling for cloudy most of the day, which would be AWESOME!  If the sun comes out, I’m going to suffer much, much more.

I am feeling fairly chill today.  Every once in a while, waves of “oh shit” come over me, but those are few and far between and passing rather quickly.

I’m focusing my energy on getting my mind right for the race and keeping nutrition where it should be.  I have been thinking about all the “whys” that I run and all the “whys” that made me want to do a 50 mile (and 100) mile race.  I have thought about all the things that I have accomplished this year.  I’ve also smiled as I reflected on the way that my attitude has changed toward these longer ultra distances.

So whatever happens on Saturday, I’ve already won.