There’s a saying, “Success occurs when your dreams get bigger than your excuses.”  I feel like this has become the theme of my year, even though my official word of the year is uncomfortable.  I suppose they go hand in hand. 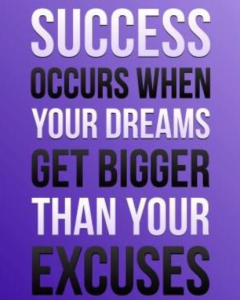 When you want your nutrition to be on point, but you love carbs too much…

Most of you know that I made the transition to triathlon.  Running is still my primary sport, especially because of the time of year we are now in, but I love tri training and love triathlon racing even more.  As part of a much larger, long-term plan, I signed up for IRONMAN Texas 70.3 next April in Galveston.

Yes, I eat nutritious food.  But I have been convinced for quite some time that I don’t eat nutritious food in the right amounts.  I have known that my macros were off but just couldn’t wrap my head around how to begin to fix it.  I focused on eating more protein, but that was the extent.  Plus, I really love carbs.  REALLY.  LOVE.  CARBS.

Also…. I.  HATE.  RACE.  FUEL.   I have been grasping at straws for quite some time because I just can’t handle the gels/chews/crappy sugary substances that are sold to endurance athletes as “fuel”.  Once you suck down that first one, you are on – hook, line and sinker – for the remainder of the race.  You can’t not take them or you’ll crash.  For me, continuing to take them to avoid the crash always meant increasing stomach upset with each added mile.  So I had this love/hate relationship with gels (love, because I needed them; hate, because I needed them) and I had been trying all sorts of different things for fueling.  I tried UCAN (which tastes terrible), Base Rocket Fuel, Clif Organic Food, baby food (no lie – the squeezable pouch). I didn’t find anything that worked the way I wanted it to.

I wanted to get fueling down during my upcoming marathons in hopes that I could somehow manage it for the much longer 70.3 in the spring.  I became COMPLETELY convinced that my nutrition (or lack of balanced macros) was holding me back in training and performance.  So I kept quizzing Brent because he had gotten a really good grasp on his nutrition and had great success with it during training and racing.  He ended up referring me to a metabolic nutrition specialist that he worked with and I hired her almost immediately!

Had I talked to this lady 6 months ago, I wouldn’t have been able to accept (or execute) her approach to nutrition.  This is where the old saying becomes relevant to my journey: “Success occurs when your dreams get bigger than your excuses.”  I am on a nutrition plan that limits my carbs to 120/day.  If you haven’t ever counted carbs, I’ll just tell you that is NOT MANY.  She asked me to completely cut out all grains (for now) – that hasn’t been a walk in the park.  But helping my body become a more efficient machine is TOTALLY worth it.  My fuel for my workouts is UCAN, which still tastes terrible, but I found that orange is tolerable.  I’ll use UCAN before the race and will make UCAN gel to take hourly while I’m out on the course.

Sunday, I’ll be running Rochester Marathon and I will get to see how far my body has come and how this new fueling strategy will work and I can’t wait!!

I haven’t blogged much at all lately.  In fact, I didn’t even write a race report for my last half on August 14 and I ended up 3rd in my age group by some miracle!  The real reason I haven’t been blogging: summer running has had me down in the dumps.  I think most people would agree that I am a “glass is half full” person – I always try to find the bright side.  Try as I may, I could not find the bright side of running during August.  The heat and humidity were stifling.  I had long since tacked the psoas issue and felt close to 100%, but I couldn’t tell that my fitness was improving and it certainly didn’t show in my run times.  I BATTLED through my long runs.  BATTLED.  I had to fight the urge to stop and quit every single week….every single mile….every single minute!!  When I signed up for Rochester, I knew that summer marathon training would be tough, but I had NO idea HOW tough.

I did have rays of sunshine sprinkled in here and there.  I could tell that my speed was improving on the track, even in the heat of the summer, and my times were very, very close to what they had been before I messed up the psoas and the weather turned into the Devil’s Armpit.  Track days always gave me hope. 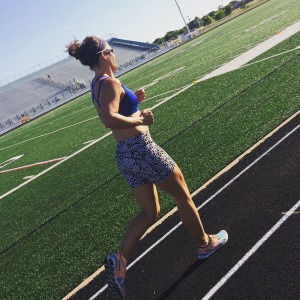 But, hallelujah, the air is changing!!  The temps are still very hot, but the air is beginning to cool down much more quickly as the sun goes down.  This, plus a couple of cool fronts, have had me feeling like my old self again and I am very hopeful for a good performance in Rochester!

On Monday, my dear friend/hairdresser/photographer/kayaker Kim, came to accompany me on my first open water swim EVER.  The swim went surprisingly well….I am out of swim shape, for sure, but the actual task of swimming in a lake didn’t freak me out.  I know that having her there was a big help mentally.  I am unsure how I will handle swimming when I am my own island, but at least I know that I can get out there!! 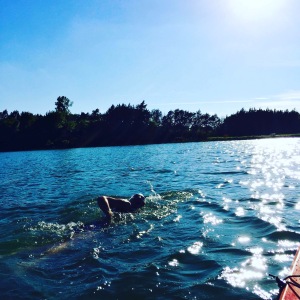 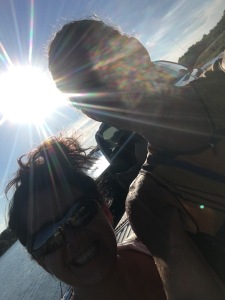 Once again, I have been bitten by the taper crazies.  It happens EVERY SINGLE TIME I taper, so why would I expect this one to be any different??

My good friend, Carmen, told me a couple weeks ago that she was going to put a tracker on me during taper.  And Jenn, who knows what a spazz I am, has been constantly checking on me to make sure I haven’t done anything stupid.  Well, there is only so much that a person can do.  I managed to hurt myself in spite of the constant supervision.

When Kim and I went out to Bonham State Park, she tried to get me to jump off the dock while she loaded her kayak in the water.  I REFUSED, saying that I would have to walk in to the water at Galveston and I would NOT be jumping off any docks to start my swim.  I should have listened to Kim.

The boat ramp at the State Park is not used much.  The *lake*, if you could even consider it a lake, isn’t large enough for any real boats.  As soon as I stepped into the water, my foot slipped on the slime that covered the ramp and I nearly went down.  I stopped the fall…..WITH MY TOE.  At the time, I didn’t think much of it….it didn’t hurt that badly.  I was just relieved that I hadn’t slipped and fell and caused some sort of injury that could have hampered me in the race.

Fast forward 4 hours and I began to get concerned.  The toe was throbbing and swollen and had started to bruise quite a bit.  It even hurt in bed!  Luckily, the throbbing and soreness went away during the night and the toe was only sore to the touch – it didn’t even hurt to walk!  I was still a little nervous, though, because I hadn’t run on it and I just didn’t know how running would affect it.

I ran last night and THANK THE LORD, I had no issues!!!  I was SO RELIEVED!

Hopefully, this will be the only taper madness that plagues me this time!