Well, here I am, on my LAST day of summer vacation – I must return to work on Monday. <insert sobs here>  Honestly, the summer has flown by and I don’t really have much to show for it.

Ending the volleyball season with a bang

The first part of the summer was spent shuttling Alli back and forth to practices as her team made final preparations for Nationals.  The last week of June, we all made our way to Indy for our last tournament as 11 year olds, hoping to bring home the gold!!

We were to start play on Tuesday, June 28 but our coach flew in 2 days early (on Sunday) to sight-see and get the team checked in.  When he arrived, however, he started feeling badly – so badly that he went to the ER.  He ended up having an emergency appendectomy on Sunday evening!

Of course, the girls were beside themselves with worry.  They LOVE Josh and wanted him to be OK.  And they depend on him during games to keep them on track and motivated.  Everyone was nervous because we just didn’t know what to expect or how the girls would perform without him on the sideline as he was not cleared to come to the gym on Tuesday.

Our assistant, Courtney (who is a very good, knowledgeable coach on her own), stepped up and led the girls to a 2-1 finish in our first round of games.  The one loss of the day actually put us in a better position going into Wednesday – we were in a pool with much easier teams AND going 3-0 would guarantee us no less than 3rd place.  Josh was back on Wednesday, albeit subdued, and the girls took care of business by beating everyone in 2 sets.

Thursday was bracket day….we were in the gold bracket and only needed to win one game to make it to the finals.  We knew that any team we faced at this point would be tough, but any team we faced could be beaten as well.  The girls came out swinging – I have never seen them play so well and with so much intensity and heart.  The team we were against was a very talented team that received serve very well – a sound passing team is always harder to get out of system.  We lost the first set with a close score of 24-26 but rallied tough and kept them on their heels in set 2 for a 25-17 win which forced a tiebreaker set.  Set 3 looked to be all in our favor until the momentum changed and we ended up with a heartbreaking 13-15 loss.  The fact that the girls were to get a 3rd place medal wasn’t much consolation at this point.  They fought with everything they had but just came up short.  The other team played fearlessly and we ended up playing it too safe after the momentum changed.  It was a hard pill to swallow.  They all wanted to play on the championship court and they all wanted that GOLD medal!  True competitors, through and through!

Parents had a hard time accepting the loss as well.  We all knew that our girls had the ability to win – it just didn’t happen that game.  And the reality was that any of the final four teams could have beaten any of the other final four teams….depending on each game.  The fact that we placed 3rd in the country isn’t anything to be ashamed of.  So many teams never make it to Nationals.  So many teams that make it to Nationals never even medal.  This was an amazing experience and quite an accomplishment for our girls!

I have to say, I have NEVER been more proud of Alli.  She is a talented setter, but has struggled with defense (LONG STORY which I will not bore you with here).  She has blossomed and improved beyond my wildest dreams under Josh & Courtney’s coaching this year.  Her defense at Nationals was RED HOT!  I have NEVER seen her play so well and so consistently.  So proud!! 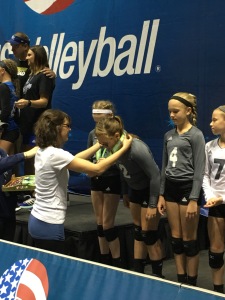 I counted the end of volleyball as my official start of summer.  The season was so exhausting – club volleyball at any level is quite a commitment, but being on a national team that has a post-season requires even more.  I think it was less the volleyball and more the driving one-hour each way to practice that wore me and Alli completely out!  We were ready for a break, for sure.  The only drawback of the end of volleyball was that I had to intentionally make time to go swim, as I had been using Alli’s practice time to do those workouts.

It still seems as if I have been busy and had no time to check anything off the summer project lists, but I have NO idea what I have been doing.  I have enjoyed having the ability to workout at whatever time I chose during my day.  I have been getting my workouts done…..beyond that?  Not much.  LOL

Always up for a new challenge

I have started experimenting with meal prep.  Marathon training officially starts Monday, after I complete my first sprint triathlon!  I MUST get better at what I eat for lunches at work.  I never eat poorly, but I want to be more prepared and have more nutritious food handy.  I have a good handle on my training  and I know that Brent will have me as fit as I can possibly be to be ready for these upcoming races.  At this point, I feel that getting myself to the next level of nutrition will be the best way to enhance my training and performance.  I love how my journey is always evolving and presenting new challenges to overcome!

When I first started this journey 5 years ago, I started by counting calories.  I would drink half a soda instead of a whole, to cut calories.  Then I realized I didn’t like sodas anymore and cut them out all together.  The next things that I cut were chips and fried foods.  Along the way, I began to look at food differently – as fuel for my body instead of just calories to be counted.  That’s when I began to try to pay more attention to eating food that would nourish my body instead of eating something that was nutritionally void.  And now, I am moving forward again.  I am trying to focus on getting a better balance of nutrients and macros (I’ve been pretty heavy on the carbs! LOL) because I feel that will give me biggest advantage for  performance.

I’m also excited to have been invited to a Wildtree meal prep party.  This will help me in having more nutritious family meals ready to cook and will hopefully help alleviate some of the stress that comes with the full-blown schedule.  Anything I can do to make sure that I am not tempted to take short cuts will pay off in the long run.

And now, I must go and do my last bike workout before the triathlon on Sunday!