I was so excited to be able to run Hot Chocolate 15k in Dallas this past weekend.   Hot Chocolate started giving out some sweet medals in 2015 but since I was just beginning my come-back from the ITB injury, I was not in the position to race.

Even though Alli had a tournament on the same weekend as Hot Chocolate this year, I decided to take a gamble and run that race.  (The gamble payed off because she played in the afternoon!)  My next *big* race is Cowtown Half Marathon at the end of February.  The timing of Hot Chocolate 15k in relationship to Cowtown works well (for me) as a training run.  Of course, who ever runs races truly as a *training run*?  (Hint: not me)

Getting there was half the battle

Traffic along the way and into Downtown was light, thank goodness, because it came to a virtual stand-still as I neared the parking areas.  I still had plenty of time to get parked and to the start line on time.  The reason that I even mention this is that I was witness (once again) to the stupidity of humanity.  The road on which I was stopped was RIGHT NEXT to a DART station, and yet, people still stopped in the middle of the tracks as if no trains ever came through.  One person came very close to getting the top of his car whacked.  I laughed as he managed to back out-of-the-way, literally in the nick of time. 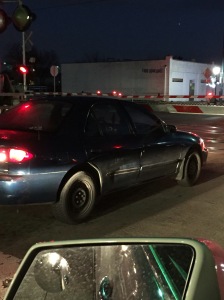 Meeting up with friends, old and new

Several of my Twitter peeps were running and we had grandiose plans of meeting up before the race – one even came down from Tulsa!  I was really excited about meeting them, but traffic held them up and we ended up only seeing each other long enough to snap this pic.  Maybe our paths will cross again soon!

I met up with another special friend before (and after!) the race – Rebecca.  I met Rebecca through Alli’s volleyball team.  It didn’t take us long to realize that we are on about the same level of running crazy and have been pals since! 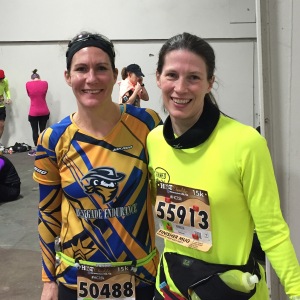 Two years ago when I ran Hot Chocolate, my time was 1:37.  When I registered this year, I had to provide recent race results to prove my pace in order to be placed in a corral.  OK….I am much faster now than I was then, but I still have a hard time thinking of myself as a faster runner, so it caught me off guard!

Imagine my surprise when I figured out I was in the very first corral!  I still can’t believe it! LOL 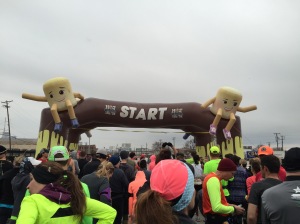 I found yet another friend, Kellie, in the corral and we started the race together.  However, my heart rate was being wonky (probably due to the cold) and I sent her on her way about one mile in.

I LOVE running by heart rate.  It takes ALL the guesswork out of running, for me at least.  But I’m not going to lie, during the first 2.5 miles, I questioned whether or not the race would turn out well because my heart rate was wonky!  I know that my heart rate is unsteady for the first couple miles when I am cold, but I was still a little concerned when it was still acting crazy during mile 2.

I started pushing up my heart rate after mile 3 (just like I was supposed to), but I was wondered if I would be able to hold that intensity the entire race.  I think because my heart rate was so unstable early on, it made me feel a little fatigued.  Still, I somehow managed to keep rocking-n-rolling along.  I felt like I hit my stride after mile 5…that is, until around halfway through mile 7.  I started feeling tired (again) and started wondering how the last couple miles were going to play out.  Then I remembered that I had brought a gel.  (Apparently fueling concepts have been completely removed from my brain because I have been having trouble remembering ANY and ALL kinds of fuel lately!)  So at mile 7.5, I took my gel and kept on trucking!  But when I got to the bridge in the middle of mile 8, I wanted to scream.  I DID NOT want to run up another hill!! The thing about the bridge is that the finish line is literally so close!  I was SO HAPPY to cross that finish line!

I got my medal and immediately saw my friend, Rebecca.  She had crossed the finish just ahead of me, heard my name announced and turned around to greet me.  Then I ran into Kellie (from the pic above) and we chatted for a bit, then I was off to get the bowl of chocolate goodies.  I’m not entirely sure why I got it.  I would much rather have had a beer.  I drank 3 sips of my hot chocolate then threw the rest away.  I never feel like eating after a race or a long run and that icky sweetness was just too much!

When you can’t believe the finish