Before I get to the running update, I am going to share what has been going on with Alli. 10 days ago, I took Alli and a couple of friends to a trampoline park.  There were 2 other kids there (LITERALLY) and she managed to collide with one of them during the first 5 minutes.  She was doing a back handspring when this kid darted across her path, apparently, and she kicked him in the head.  My gut instinct at the time was that she fractured it, however, there was minimal swelling and no bruising even though she couldn’t put any weight on it for a good 30 minutes.  She ended up walking it off and back on the trampolines.  I told her we needed to keep an eye on it and she HAD to tell me if she felt any pain in the coming days.  She played softball in the All-Star tournament all weekend and would complain about it hurting after the games (but she ALWAYS complains about her feet after running around in those cleats!).  I knew that something had to be done when she told me how much it hurt during tumbling last Monday.  I made an appointment in the office that handled Taylor’s broken foot a couple of years ago and we went down Thursday afternoon for the consult. Turns out, Alli fractured her growth plate.  Waiting for the appointment actually turned out to be a good thing, because the ortho told me that it was more evident with a week’s worth of healing (and would have likely been missed had we gone immediately).  As a result, Alli has to wear a boot 24/7 for the next 2 weeks.  She had a little melt-down in the car because she doesn’t want to miss a minute of volleyball (luckily we still have a 2 week break!).  Sadly, swimming is off-limits as well.

I had promised a trip to Bahama Bucks and was SO glad that we waited until after the appointment, because she needed some snowy goodness to melt her sorrows away!  Even so, she barely ate. 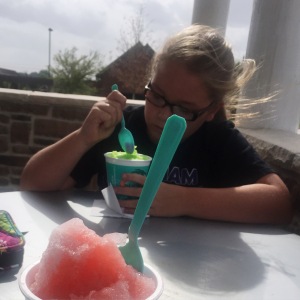 By the time we got home, the initial shock of the situation had worn off and her mood had started to improve.  Our strategy is to follow the doctor’s orders to the letter in hopes that healing will happen quickly!  She will go back in 2 weeks for a follow-up X-ray and based on the findings will find out if we get out of the boot or wear it a bit longer.  Alli has been such a trooper and refuses to let it dampen her spirits.  She even asked me if she could run (?!?) on it.  You can all stop holding your breath – I said NO!!

Most of you know running has been going very well for me over the past months.  I’ve been able to make a complete recovery, thanks to the guidance my partner/coach has been able to give me.  However, running wouldn’t be running if there weren’t bumps in the road, and I recently  hit a speed bump. True to my normal self, I really didn’t notice it at first.  Some familiar stiffness has been creeping back in, specifically in my ankles and feet.  Yes, my calves are tight.  Yes, I know my calves have been tight.  Yes, I have still slacked at foam rolling my calves.  Why?  Because it hurts like hell and it is a pain in the arse!! LOL

I discussed the issue with my partner and he encouraged me to scale back my running while in Orlando and step up the foam rolling.  Honestly, I foam rolled once while I was down there.  I know….stupid.

When we returned from vacation, I eased back into the swing of things and running was feeling pretty good….until last Friday.  Even when I have been hurt, I rarely have TERRIBLE runs.  Friday was a TERRIBLE run.  Everything hurt from the get-go and I never found my rhythm.  I was only running 3 miles, but by the last .5, I knew something was wrong.  I started limping and my right ankle was in pain.  Of course, I KNEW the cause.

I shared all this with my partner and, naturally he told me no running until we get a handle on this.  I’m happy to say that I AM getting a handle on it!  I have foam rolled, stretched, taken Epsom salt baths, worn compressions, iced, slathered essential oils and taken anti-inflammatory drugs.  I can say that waking up this morning I feel better than I have in several weeks!  I’m still in awe of the maturity that I have gained as a runner over the past year.  Even though I am still the Queen of Stupid Sh*t (#QOSS), I have been able to take this set-back in stride and welcomed the rest.  Mind.  Boggling.

I am hoping to be out again my mid-week, although I will be taking it easy because I don’t want to miss the 15k that is planned for this weekend.

Until then – Happy Foam Rolling!