Saturday marked a milestone of sorts for me.  I ran a 10k….my second 10k race ever.  Once I ran my first half marathon, I thought was kind-of done with the shorter races. All it took was a good friend recently pointing out the benefits of 10k’s as speed training for half marathons and I was sold!

I ran my first 10k in November 2012 with 1:02:28.  Going into this race, I knew that I should be able to come in faster than that, but what I really wanted to beat was a 10k PB (NO, NOT peanut butter….Personal Best.  (I don’t run peanut butter – I consume it! (Ok..maybe I do run ON peanut butter. ))) of 58:38 that I ran in training last August.  I REALLY wanted to beat that time.  However, I didn’t believe in myself.  A lot has happened since August and my confidence has been shaken, in spite of the amazing direction that training has been going of late.  I think another reason I was so vested in this race was that I was actually going to be able to race it.  I wasn’t able to race my marathon because of my injury and had to hold back on my half marathon a couple of weeks ago since it was my first distance race after my recovery (so any time could easily be explained away with because my coach made me hold back).  My credibility as a runner was on the line, so to speak.  Maybe not as far as everyone else was concerned, but definitely regarding my perception of myself.

This was a small, local race which was to be held on some trails in Plano, but after the monsoons (11″ of rain and counting for May), the trails were flooded and a new course was mapped out on the streets at the last moment.  The course for the 10k was basically running the 5k course twice.  I generally don’t like courses like this, but I was just happy to run the race and I think the race organizers did a great job with what they had to work.  Race day weather was iffy, as storms were slated to move through, although not until after the race.  But let’s face it: this IS Texas and the weather changes minute-to-minute.  The weather was cloudy and the humidity was stifling, making the air feel so thick I thought I could cut it with a knife.

After warming up, my partner/coach went over race strategy with me and I felt fairly confident about being able to execute it and off to the start line we went.  He told me to get as close to the start line as I could and that he would see me at the finish line.  I was so excited that Taylor had decided to run the race  and was glad to have her to chat with while we waited for the gun to go off.  Side note: my heart rate at the start line was between 97-101.  By comparison, my normal heart rate before a run is around 70.  I was SO NERVOUS!!!  I kept telling myself to calm down because if my HR was that high at the start, I knew I would be in trouble later in the race, but I couldn’t calm myself down as much as I tried.

The race started and off we went.  I’m glad that I was close to the start line as there were fewer people to weave through and as a result I found my groove fairly quickly.  However, my groove was 9:15 and I was supposed to hold 10:00 for the first mile.  I was able to slow myself to 9:45 and even 10:00 for a small period of time, but basically I went out too fast. (Please act surprised.) Garmin says that my best time on that mile was 8:06 (gak!!!) and average heart rate 151 (NOT GOOD).  My average pace for that mile was 9:36.  (Average paces actually make me look like I am in control of my pace.  If only you could see the flux within each mile….)

Mile 3 came in at 9:12 – still much faster than I should have been running.  The top pace this mile was 8:36 and my HR was 170.  (Thank goodness I was too worried with my pace to pay attention to my heart rate a this point, or my HR would have spiked even more…)  My 5k time was 28:00 flat.  I have no idea if this is a PR for me (don’t kill me for not keeping track!) but I know should be pretty close!  The thing I remember about nearing the 5k mark was how HOT I felt because of the humidity and ZERO breeze.  When I hit the 3 mile mark, it started sprinkling and I remember being SO excited.  The excitement was short-lived, as it seemed to sprinkle only for a few seconds.  (Then it was back to nearly-dying mode)

Mile 4 was the point that I was supposed to shoot for a 9:00 pace until kicking it up a notch during the last mile.  Mile 4 also marked the start-over point for the loop (aka mental assassination).  I was determined to kick it in, but at this point the heat and humidity were starting to wear on me.  Also wearing on me was knowing I would have to run all those inclines again, but this time around I would already be tired.  (OK, and I’ll admit this may be where going out to fast started to affect me.) Even though I had a great first 5k, I doubted my ability to maintain this pace for another 3.1 miles.  Mile 4 came in close to my mark, though, at 9:04 and heart rate average of 178.  I was beginning to realize my heart rate was really getting up there which added yet another concern regarding my ability to maintain and increase during those last couple miles.  (This is also the point at which I questioned HOW I was ever able to run for 26.2 miles! LOL)

Mile 5 came in at 9:08 and my heart rate average went up to 182.  I used the downhills on this mile to get my heart rate down somewhat and on the ups tried to simply maintain effort (not necessarily pace) so that my heart rate didn’t spike too much. (And you just thought I ran without a plan!) Apparently this strategy worked, as it wasn’t a monumental jump like the previous miles. (BTW, I completely realize that my heart rate didn’t have far to go at this point, but, hey, give a dog a bone here.) Again, the heat was really starting to wear on me and I couldn’t help but wonder if I would be able to keep pushing myself without losing ground.  Luckily, I’m stubborn beyond measure and was able to maintain my pace.  I also passed Taylor toward the end of mile 5.  Seeing loved ones during a race is so meaningful and uplifting and her encouraging words definitely gave me a boost.

Mile 6 was when I really tried to pick it up, but it seemed like my legs were moving in slo-mo and the pace on my Garmin was STUCK.  Passed my coach and he told me it was time to kick it up.  I may or may not have cursed at him.  COULD HE NOT TELL I HAD ALREADY KICKED IT UP?!?  OK…I did kick in a little bit more after my encounter with him.  I clocked a 9:01 with my best time being 7:58 (maybe Garmin got confused?  I don’t even think I can run that fast, if only for a few seconds.) and my last .2 came in at 8:27.  Heart rate averages for this last leg were 184 & 187.  I was so upset with myself because, at the time, I didn’t feel I was picking it up very well.  Looking at the data, I realize that I attempted the pick up but my max heart rate was 192.  I am OK with that, because it tells me that my body was doing all it could do.  Aside from my pace goal, I wanted to give everything I had and leave it on the course.  The max heart rate tells me that I did just that.

My official time was 57:46, beating my personal best by almost one minute!  Taylor was waiting for me at the finish line.  Of course she ran a 52:33 without no training and snagged 3rd place in her age group.  Speaking of age groups….I was told (after we left) that I had placed 2nd in my age group, which was surprising to me.  When we started searching results, I had been placed in the 45-49 AG. (WHAT THE HECK?!? (For the record…I am 42 and should have been 40-44))  OF COURSE I emailed the timing company to get this corrected!

Taylor and I hung around the finish line waiting for my partner to come through.  After he finished, we discussed medals, but didn’t see anyone handing them out so assumed that there might not be a medal for this race.  As we were leaving, though, we noticed several people did, in fact, have medals but at that point we were too tired to turn around and try to get ours.  I know that the hearts of runners all over the world are breaking right now, but I’m OK about not having a medal.  Really.  Although, I’m not sure Erica is OK with me not having the medal… 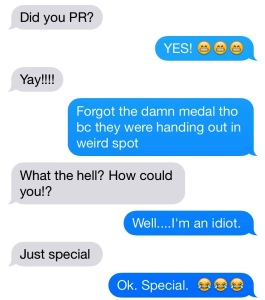 All in all, I am beyond happy with the race results.  Aside from going out too fast and dealing with my racing heart rate, the race went very, very well – MUCH better than I ever expected.  My legs felt great the entire time.  My stride felt almost effortless.  It was so natural and I didn’t feel I had to force it at all.  One day post-race and I am amazingly well – aside from some minor glute soreness now and then,  my legs feel as loose as if they hadn’t even run yesterday.  Considering it all, I declare the race a success!!

I have to mention that I have some of the most wonderful friends.  Friends who believed in my ability to crush this PR even when I didn’t believe it in my heart.  Friends that sent me messages of encouragement before my race.  I thought of all of them during the race and their support definitely carried me that last mile when my heart could have jumped out of my chest at any moment.  And even though this was a tiny race, it was a biggie for me and I am grateful beyond words for their support.