It’s no secret that my life is like a 3-ring circus, and most of the rings are of my own doing.  If only I had Hermione’s time-turner, I would be able to stay on top of everything!!  The past few days have gone by in a whirl wind!  I wish I could say my toilets are clean and all the clothes are put away, but (sigh) I cannot.  However, I logged some nice miles over the weekend and spent the rest of it watching Alli’s 10-year-old team dominate the 11s, so the toilets can wait!

First, I’ll get to the running updates:

Thursday evening, we ran hill repeats again.  They weren’t as much fun this time, because my partner had me run them at easy effort on the first 4 repeats.  (I was NOT happy about that, but he didn’t seem to care one bit in the least.)  The last 2 repeats were shorter, but he instructed me to give a hard effort on them.  I clocked a pace that I didn’t even know was possible for me.  OK….I’m not stupid…I know there is NO way I could sustain that pace for any distance at all, but it was a really exciting payoff to be able to see it….attached to ME!  The weirdest thing is that I didn’t go through any stiffness or soreness from this workout.  I’m still not quite sure what to think about that.  When I got home and showered, did some yoga, foam rolled and put on my new Zensah recovery socks.  OH.  MY.  GOSH!  I love them!!  They are amazing and felt sooooo good! 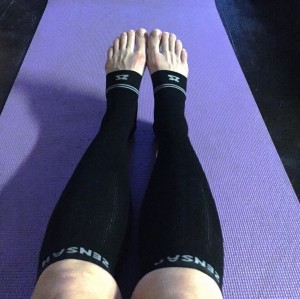 Saturday morning’s long run was to be 10.5 miles, at a god-awfully slow pace.  However, I am coming to understand and appreciate what SLOW runs do for your body, so even tho my partner couldn’t make it for that run I knew I had to maintain the pace.  I kept the pace pretty well through mile 5 with not much fluctuation (SO NOT Jen).  Around mile 6 (when Jen got the run-high), pacing became painfully difficult.  I looked down more times than I could count and found myself close to 1:00 faster than my prescribed pace, but, contrary to my normal response (run the faster pace and just get a little faster), I managed to slow myself and get back into the zone.  This is quite a noteworthy accomplishment and I still don’t know what it means or how I was able to accomplish this on my own.

Around the time that I started having pacing issues, I also had some minor ITB issues.  I tried not to panic.  I stopped and stretched and continued on the way.  I wrestled with the decision to scrap the run and take a shortcut back, but I decided to continue on.  That was probably Crazy Jen rearing her head, but I can’t keep her locked away ALL the time.  I may be rushing recovery by having entered  a half marathon on 5/3, but logging the miles for that  training run was in the back of my mind.  Throughout the day, I felt that ITB tightness, but stretched as much as was possible (which wasn’t much since I was now camped out at the Dallas Convention Center).  The good news is that it now feels great.  I’m hoping and praying that it is all related to increase in distance from the more focused training I’ve been doing the last 6 weeks.  For now, I’m taking the Scarlett O’Hara approach and have decided I’ll worry about that tomorrow.

After the Saturday long run, I came home and did some recovery yoga and foam rolling.  Then Alli and I packed, frantically, and were off to Dallas for a tournament a the convention center.  Alli’s team played in the Mizuno Lone Star Classic, one of the National Qualifiers for USA Volleyball.  This qualifier is the largest in the nation (fitting, since everything is bigger in Texas) and is divided into 2 weekends…each one with over 100 courts.  The teams are seeded, then divided into pools of 4 teams (sometimes 3 teams due to numbers).  There is an AM wave and a PM wave each day during pool play, then brackets are played out on Sunday.  Most divisions are giving out bids for the Girls’ Junior National Championships, so there are 2 days of pool play for every age group except 11s.  And since Alli’s team is a true 10s team, we were playing in the non-bid 11s division, which meant we only played Saturday and Sunday.

We started our pool on Saturday with our referee duties and I gave our scorekeeper the match off and kept score for her.  Mainly because it would make the match go faster, but I also really enjoy keeping score.  I was much more comfortable keeping score here, rather than Friday night when I kept the books for softball.  (I’m too ADHD to keep up with the base runners!)

Then, it was time for our girls to get to work.  We were in a 3-team pool, and HAD to win both of our games in order to keep our hopes for Gold bracket alive.  The first set was sloppy, but the girls pulled it together and came out on top in the end….29-27.  The next set was a beating and we won 25-6.  We should have won both sets 25-6, but a win is a win.  Next up was an Oklahoma team.  They stomped us in the first set 14-25, but we answered in set 2 for a 25-14 win, finally pulling it out in the tiebreaker 15-12.  These wins put us first in our pool and guaranteed us the right to play for gold on Sunday morning.  However, we had a crossover match later that evening to determine pool seeding for those pools.  AGAIN, playing an Arkansas team, we lost the first set 22-25.  And AGAIN, we battled second set to force a tiebreaker, which we won 15-7.  (WHY can’t they just save my heart and take care of business in 2? LOL)

We were back on the court early Sunday to ref, then play our last 2 pool games.   Just like Saturday, we were in a MUST WIN situation.  We had to win both of our pool games to make it to the 8 team gold bracket.  We took care of business 25-15, 25-5 in the first match.  The second match was closer, but we still managed to close it out in 2 games: 25-22, 25-23.  Making it to the gold bracket meant that the lowest we could finish would be 5th of 44 teams.  Sadly, the first team we were to face would be a team that knocked us out at a tournament a few weeks ago, effectively handing us 5th place in that tournament as well.  We played on our heels the entire first set, which ended terribly 8-25.  The girls came ready for battle during the second set, but we made too many unforced errors and ended the game a little short with 19-25.  Our girls were the only 10s team in this 11s division and ended up 5th.  There is NO way we could walk away with our heads down!!

Normal tournaments are exhausting, but qualifiers are exhausting x 10.  We walked out of the convention center at 9:30 Saturday evening and had to be back on the court, ready at 7:30 AM.  I had reserved a room at the Omni, because it is connected to the Convention Center and for too many good reasons to list.  When we got back to the hotel, the wait to eat at the hotel buffet was 1 1/2 hours.  I knew there was NO way we could do that, so, much to Alli’s disappointment, she had to raid her Sunday snack bag.  I assured her we would find something healthy to eat at the concession stands on Sunday….she was SO worried about her healthy snacks!!  (WHY???  I had already successfully  motivated her to get her serves in with the promise of a smoothie!)  Since the hotel buffet had been such a fiasco on Saturday evening, I decided to order room service for breakfast so that we wouldn’t be stuck in that same situation again Sunday morning.  She was SO excited when it arrived!  Doesn’t take much to excite a 10-year-old!

The Omni did a great thing for the Lone Star guests and set up a room in which we could check our luggage until we were finished in the convention center.  It saved me a big hassle as my car was in the valet.  After we claimed our luggage and finally got our car out of the valet, we were on our way home.  And in less than 15 minutes, Alli had settled in for a nice, long, well-deserved nap.

Happy Marathon Monday!!  I’m cheering on all the runners!