You can stop worrying….I am surviving the ice/sleet storm, if just barely.  But, this really happened:

Maybe not exactly, but pretty much.  Working for a school district, I have been lucky to have both Monday AND Tuesday off!!  Now, I really  wanted to *save* those days for Easter and Memorial Day, but I haven’t wasted one minute of my time off!!  My regular schedule is so packed, generally, that I don’t have a lot of spare time to get things done around the house.  Yesterday, I worked the entire day and got all but 2 things crossed off my list!  I would have tackled those as well, but we got the call fairly early about school being cancelled today, so I decided to relax the remainder of the evening.

Yes, it is white.  No it is not snow.  So please stop saying we had a snow day.

Our poor pool looks SO COLD!!!

The weekend was fun, fast and furious!  Alli celebrated her birthday Saturday by playing in a volleyball tournament.  We were up early and left the house at 6:15.  Our little Frogs played their game and ended up 1st in our pool again!  The funny thing is, we dropped one set, and one of the girls couldn’t believe we got first because “it didn’t feel like we won”.  I love the way these girls just expect that they will win.  They work together so well and in each game, a different player shines.  It has already been a fun season and the best is yet to come!  After play was finished for the day, Alli passed out cupcakes and the girls sang “Happy Birthday” to her.

I knew our little Frogs would have a hard road in the Gold bracket on Sunday.  We easily beat the first team we played.  In the next round, we faced the Texas Pistols – a team that I hadn’t seen but kept hearing about.  They really weren’t better than us.  I was disappointed, actually, in their lack of discipline.  The setter rarely took the second ball….just whomever was close to it would bump it or set it.  They killed us with their serves, though.  We had difficulty passing in the first set and lost 25-18.  We came out ready to play in the second set and had those Pistols on their heels the entire game, but they were able to get the advantage late in the game and won 25-23.  We ended up 5th overall, which isn’t bad for a bunch of 10 year olds playing 12s.

We also wore our “Battle for Bear” shirts in honor Mikayla “Bear” Bass, who was diagnosed with myasthenia gravis, which is a disease that causes muscle weakness.  She played for Madfrog and went on to play collegiate volleyball at St. Mary’s University before being diagnosed with this terrible disease.  The family is raising funds for a trip to Russia where Bear would receive a stem cell transplant that isn’t approved by the FDA.  To make the situation even more sad, Bear’s dad has recently been fighting prostate cancer.  You can read more about Bear here. 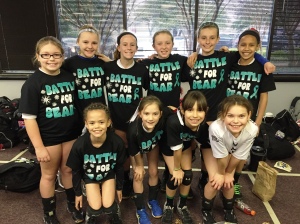 The shirts sales are part of the fundraising effort, but anyone can donate via website link above!